skip to main | skip to sidebar

With Election Day less than 50 days to go, the Department of Labor in Puerto has been accused of fudging the unemployment numbers.  Judith Rodriguez, a demographer, says the local agency obtained a much lower unemployment rate by using the population number from the 2000 Census instead of the most recent one conducted in 2010.  From 2000-2010, the island's population shrunk by 350,000 inhabitants as an increasing number of Puerto Ricans emigrate to the mainland for better economic opportunities.  The island's official unemployment number for 2011 was 15.7%, according to the local labor department.  However, the Bureau of Labor Statics puts the actual number at 18.5%.  Rodriguez also criticized the government for both manipulating the labor force population number, as well as the number of those looking for work, and estimates the unemployment number for 2012 is about 20.7%.  The government claims it was at 13.5% this past August.

The labor force participation rate in Puerto Rico was 39.2% in August, which is 0.7% less than the number published the month before.  Unsurprisingly, some people become disillusioned and decide to stop looking for work altogether.  Thus, decreasing the size of the labor force as those who are not actively seeking a job are not included in this group.  Meanwhile, a recent visit by Irene Mia of the Economist  predicts that Alejandro García Padilla (he hails from the pro-status quo party, PPD) will become the next governor of Puerto Rico.  This is due to voters' discontent with Gov. Fortuño, and not because of García Padilla's substance as a candidate.  Mia says Fortuño's austerity measures were necessary, and will help the island achieve an estimated 1.4% growth next year.  Regardless of who wins the elections, Mia asserts that the island will continue to undergo a difficult economic period.  Touché.
Posted by adriana at 12:25 AM No comments: 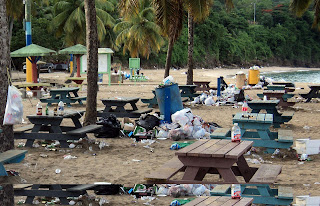 Crushed Medalla cans, empty Coke cans, and all sorts of garbage were strewn across the island's beaches the day after La Noche de San Juan this past Saturday.  This year's aftermath was certainly not an anomaly. Nevertheless, it drew much ire on social networks. "Thanks Puerto Rico, for maintaining our country as one of the worst," wrote M. Lopez on El Nuevo Día's Facebook page.  This scathing remark was in response to an article which appeared in the island's largest newspaper, titled "Indiferencia total hacia el ambiente" (translation: "Total Indifference Towards the Environment").  Sadly, it's not just Mother Nature taking a beating though. When people have such complete disregard for one of their island's most treasured assets, it demonstrates a tremendous sense of disillusion and hopelessness.

As in the mainland U.S, this is also an election year for Puerto Rico.  Confidence in the local government is practically nonexistent.  Not surprisingly, voter turnout is expected to be much lower than previous years.  It wouldn't surprise me if voters decide to simply flip a coin right before they head to the voting booth.  The candidates from the two leading parties, the pro-statehood (PNP) and pro-status quo (PPD), are deemed to be the same dog but with different collar ("el mismo perro con diferente collar" is a popular saying in Spanish).  Mired in corruption, crime, and economic recession, unsurprisingly, most Boricuas' outlook on the future of their island is less than rosy.  Neither the pro-independence or any other party has gained any momentum despite the failings of the PNP and PPD.

Over the past year, a number of politicians and government officials from both main parties were forced to leave office because they didn't pay their electric or water (sometimes both) bills.  Shockingly, it turns out that one of Gov. Fortuño's nominees to head the Puerto Rico Electric Power Authority had allegedly tampered with his electric meter to reflect a lower reading.  The guy was also behind on his electricity bills.  No, I'm not joking.  Let's not even get started on those involved in bribes and other skulduggeries.  Let's focus on a bit of good news though.  Last year, the murder rate in Puerto Rico was just over 1,130, making it the most violent in the island's history.  This year is expected to be just a bit lower. There were 364 murders reported at the end of last month, this is 97 less than the year before.

There is no good news when it comes to the economy.  The island is heading towards a financial cliff of its own.  Earlier this month, Standard & Poor's downgraded Puerto Rico's debt rating from stable to negative.  Unemployment still stands at over 14%, although many work in the underground economy and don't file any income taxes.  The island keeps borrowing to cover its debts, but it will one day max out its credit and will surely ask Washington for a bailout.  What Puerto Rico lacks is strong vision and leadership, someone who can stay above the political fray, and work with people of all political colors.  Another crucial factor ailing this island is the absence of a strong work ethic and the willingness to hustle. Until then, the partying continues and the garbage will keep piling up. 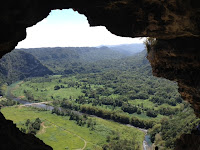 For most people traveling to Puerto Rico, the island conjures images of sandy beaches with clear blue water. Unbeknownst to most, however, is the existence of hundreds of caves scattered throughout the island. Perhaps the most popular, and the one I would least recommend, is the Rio de Camuy Cave Park. Although it is certainly interesting to visit and explore, my favorites are Cueva Ventana ("Window Cave") and Cueva del Indio ("Indian Cave") because you get to venture at your own leisurely pace. Unlike Rio de Camuy, there are no mandatory guided tours at either Cueva Ventana nor Cueva del Indio. They're also situated close enough to one another, the former is located in Utuado and the latter in Arecibo, so that you can visit both in one day. We left the metro San Juan area at around 10:30AM and had plenty of time to explore these two caves. Amazingly, we even had lunch at Lago Dos Bocas in between visiting both places.
Our first stop was Cueva Ventana. The trail leading up to this cave is located next to a Texaco gas station (note: they were charging $2 for parking per car and $0.50 per person to use the bathroom) on route 10 towards Utuado. It's an easy hike up to the cave but it is unmarked. When you reach a fork on the trail, hang a left and soon you'll reach the first entrance to the cave on your lefthand side. We took the second entrance, which is lies further up the trail, because it was much easier to navigate. Do bring a flashlight, since it gets dark inside. After walking around in darkness for a few minutes or so, you'll start to see a bit of light filtering in. Shortly thereafter, you'll encounter the opening of the cave, which offers a breathtaking view of the very lush and green Utuado countryside. 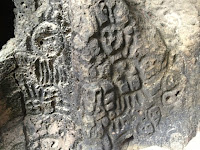 Cueva del Indio, on the other hand, is located right on the beach and you'll have to descend a wooden ladder in order to reach it. Once you reach down inside the cave, you'll see petroglyphs which reportedly date back to the days of the Taino Indians. Before you this point though, you'll have to walk and climb along a jagged limestone surface. Needless to say, I would recommend wearing sneakers or walking shoes. There were also quite a few sinkholes, so watch your step! We easily found Cueva del Indio, which is located on Road 681 at km 7.8 in Arecibo, since there was a huge sign posted at the parking lot entrance (note: they also charge $2 to park). Both caves are visited more often by locals than tourists. There is no entrance fee to visit either Cueva Ventana or Cueva del Indio. Both caves are well worth a visit!
Posted by adriana at 8:14 PM No comments:

The San Blas Half Marathon 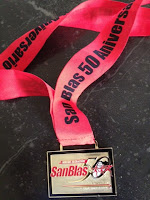 The hill, aka "el ajogillo," loomed frighteningly in front of me as I approached mile 7, the very peak, of Puerto Rico's most iconic running event, the San Blas Half Marathon last Sunday. Geoffrey Mutai, the winner of both the New York and Boston Marathons in 2011, won the race and finished at 1:03:53. The course is known to be quite challenging, since it involves a lot of uphill running. Given its level of difficulty, I always had this notion that San Blas was out of my reach. My sentiments changed last year, when I achieved one of my lifelong dreams of running a marathon. Feeling a bit more confident, but yet still considering myself very much an average runner, I decided to run San Blas for the first time this year, and I'm extremely happy that I did! I really enjoyed it, even though it was my third half-marathon and it was my slowest finish time. The experience was wonderful but grueling. As Mutai said though, San Blas is not a race where you'll obtain your personal record. My official finish time was just over 2 hours and 6 minutes.

I've been consistently running for the past 12 years, but didn't take part in any races until I moved to the island in 2006. It has been a really important part of my life, it helps keep me healthy both mentally and physically, and it's something which I feel extremely fortunate to be able to do. One of the best things I love about living in Puerto Rico is the weather, which permits runners to train throughout the year. Since San Blas takes place in Coamo, heat and humidity are of utmost concern. Needless to say, staying hydrated is extremely important. According to my running buddy, there weren't enough water stations scattered along the course. I did run with a fuel belt. Luckily, I was also warned in advance that were wouldn't be any mile markers or pacers, so I brought my Garmin watch with me.

Simply said, the San Blas Marathon is not well-organized. Those of you who are interested in registering for it, I urge you to do so in advance. I sent the registration form by regular mail back in December, and I did not get any confirmation. You are not given your BIB number and race packet until the day of the event. Some of the runners who registered on the same day were not able to get their chips. Others finished without being given a medal, as they apparently ran out. Something which I would also strongly suggest is to get to Coamo early, before closes down many of the roads. Although the race didn't start until almost 5PM, we left San Juan at around 8:30AM. Despite having left so early, we still ran into quite a bit of .

Upon arrival, San Blas will feel much like a street party, where you'll encounter many more drunken people than runners. The mood is extremely festive. It has become an annual tradition for many families who live in the area, and even from other parts of the island, to cheer and support those of us who run. They'll be barbecuing and having a beer, or two, while at it. We were transported to the starting line by school buses. The driver was honking his horn during the entire 10 minute ride, while the spectators waved and shouted at us. San Blas is undoubtedly a race like no other. Sadly, the day ended on a tragic note. Shortly after we left, a shooting occurred during the closing ceremony of the half marathon. 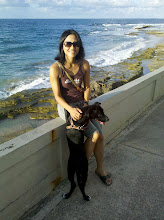 adriana
San Juan, Puerto Rico
Gave up the big city grind in New York City... in exchange for the Caribbean life, where things are no less interesting nor intriguing.

Should you have any questions or comments, please contact me at encantada2006[at]gmail.com. I welcome and appreciate your thoughts and opinions.

All photos are taken by myself, unless otherwise noted.

Please note: this blog only reflects my opinions and thoughts on the topics and issues concerned.

This work is licensed under a Creative Commons Attribution-Share Alike 3.0 United States License